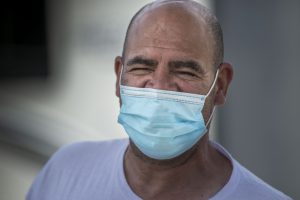 Everything came to a crashing halt last year when Ralph Matta was attacked while he slept in the rental car he was using to drive for ride sharing companies to make a buck.

He wants a home again. After more than a decade spent in homelessness and addiction, he wound up hospitalized and ultimately, he was referred to trailers at Cal Expo. He had to learn to walk again. He has to be reminded about his medicine and prompted to exercise. The newfound support and community is wonderful, he said.

“(The trailers) are what I would imagine heaven is like,” Matta, 58, said. “There are very nice people who are very encouraging and helpful. They’re always telling me it’s going to be alright. Sometimes I don’t feel that.”

Until May 23, he lived in hotels when he had money and in cars, on the street or in shelters when he didn’t.

“Here, you have your own space when you’re tired,” said Matta. “You can lay down and go to sleep and listen to your own music. You feel like a person. You feel normal here.”

The trailers where he’s seeking shelter from COVID-19 are part of a state-funded effort meant to safeguard members of the homeless population who test positive for the virus or who are at a high risk of contracting it.

The city of Sacramento received 63 RV-style trailers from the state in April. They are part of Gov. Gavin Newsom’s $150 million funding plan to protect vulnerable populations, including people experiencing homelessness, during the pandemic. The state also is also providing funding to lease motels, hotels and other facilities in partnership with counties and cities to provide immediate isolation placement and housing options for people in need.

He’s met with Sacramento Steps Forward staff, who have conducted a housing assessment to better understand his needs for permanent accommodations. Matta is hopeful he can get a roof over his head and get his life back on track after all these years, he said.

“If I could find a place where I can afford to live, maybe I could have my grandkids over,” he said. “I want to feel normal. I want to be normal.”

Matta is one of hundreds of Sacramento’s homeless population who are being pipelined into housing through collaborative efforts of the Sacramento COVID-19 Homelessness Response Team. With various funding streams, local officials plan to transition up to 500 households from trailers and motels into permanent housing stability over the next few months.

“I find hope in everything here,” Matta said. “I try to laugh about things. It keeps me from being sad.”