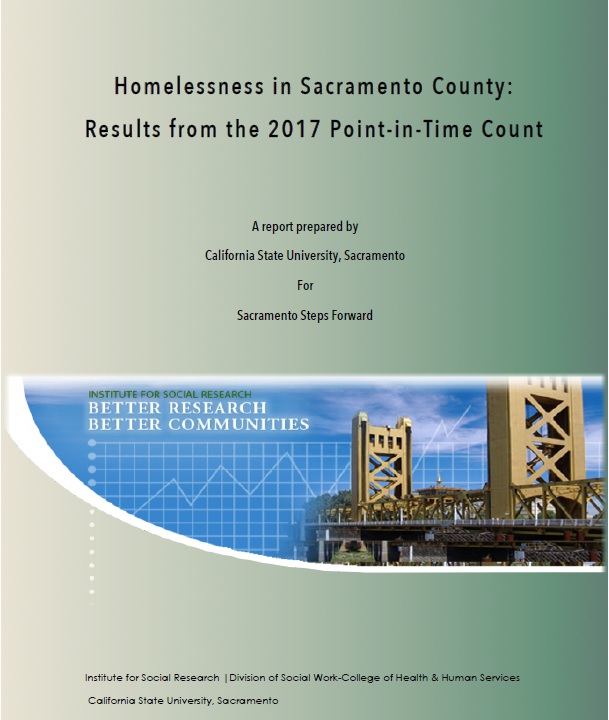 Despite housing 2,232 individuals and families who were experiencing homelessness in 2016, a new report commissioned by Sacramento Steps Forward and authored by the Sacramento State’s Institute for Social Research confirms that homelessness has increased across Sacramento county in the past two years.

According to the report, titled “Homelessness in Sacramento County: Results from the 2017 Point-in-Time Count,” the total number of people experiencing homelessness has increased by 30 percent to 3,665 since 2015. Among people who are unsheltered, a subset of the total population who are living outdoors on the street, in tents, cars, or RVs, the number has increased by 85 percent to 2,052. Approximately 31% of people who are unsheltered are chronically homeless, meaning they have experienced prolonged bouts of homelessness and are disabled.

“This report provides a sobering confirmation of what we see in our neighborhoods every day,” said Ryan Loofbourrow, CEO of Sacramento Steps Forward. “It’s frustrating that we could not stop the rising tide of homelessness, but we hope this information will provide regional leaders with the empirical data they need to collaborate on innovative solutions.”

In addition to overall increases in homelessness, the report found a 50 percent increase in the number of homeless veterans since 2015, up to 469 people. The majority of these veterans are unsheltered. Veterans continue to make up approximately 13 percent of the total homeless population.

Individuals who reported continuous homelessness tended to be substantially older and were often encountered in encampments near the American River Parkway, in contrast to younger people who were downtown. Older chronically homeless individuals – between 55 and 64 – were also more likely to report being a veteran or suffer from a disabling medical condition.

“This news affirms what is already evident to the people of Sacramento, the question is what are we going to do about it,” said Sacramento Mayor Darrell Steinberg. “We are going to implement the city’s $64 million Whole Person Care grant together with our public housing resources to get 2,000 people off the streets as soon as possible. No excuses, no boundaries, action and results are all that matter.”

There were drops in the numbers of families and transitional age youth who were found to be homeless, which is a testament to the work of homeless service providers, but these groups are traditionally hard to survey for this type of report so the findings may not accurately capture a true census of these communities.

The report cites the housing drought as a potential factor in the rise of homelessness and explains that the trend in Sacramento is consistent with other communities who have tight housing market conditions. The report also explains the potential impact of flooding on the American and Sacramento rivers and improved statistical methodologies.

“This report confirms what we all see with our own eyes: a shocking and unacceptable rise in the number of persons experiencing homelessness. We need to redouble our efforts to increase our stock of affordable housing so that everyone in Sacramento has a simple home of their own,” said Joan Burke, who is Chair of Sacramento’s Homeless Continuum of Care Advisory Board and Director of Advocacy Loaves & Fishes

Sacramento Steps Forward commissioned this report as a part of its biennial point-in-time count, which is a county-wide census of people experiencing homelessness. It provides a snapshot of who is homeless on a single night. The U.S. Department of Housing and Urban Develop requires local communities to conduct this census every two years as a condition of receiving federal funding for their Homeless Continuum of Care, for which Sacramento Steps Forward is the lead agency.

The point-in-time count was conducted on January 25, 2017 by nearly 400 trained volunteers who fanned out across the county to count and survey people living on the street, in tents, cars, and RV’s, while a data team documented the number of people sleeping in emergency and transitional shelters.

The point-in-time count and this report were made possible thanks to funding from the County of Sacramento, U.S. Department of Housing and Urban Development, and Sacramento Housing and Redevelopment Agency.

About CSUS Institute for Social Research: Founded in 1989, Sacramento State’s Institute for Social Research (ISR) is an interdisciplinary unit that harnesses the power of scientific research tools to address social problems. Their research and analysis expertise, learned through the hundreds of projects completed for government agencies, nonprofit organizations and the academic community, provides the region with actionable information that can inform key policies and decisions.