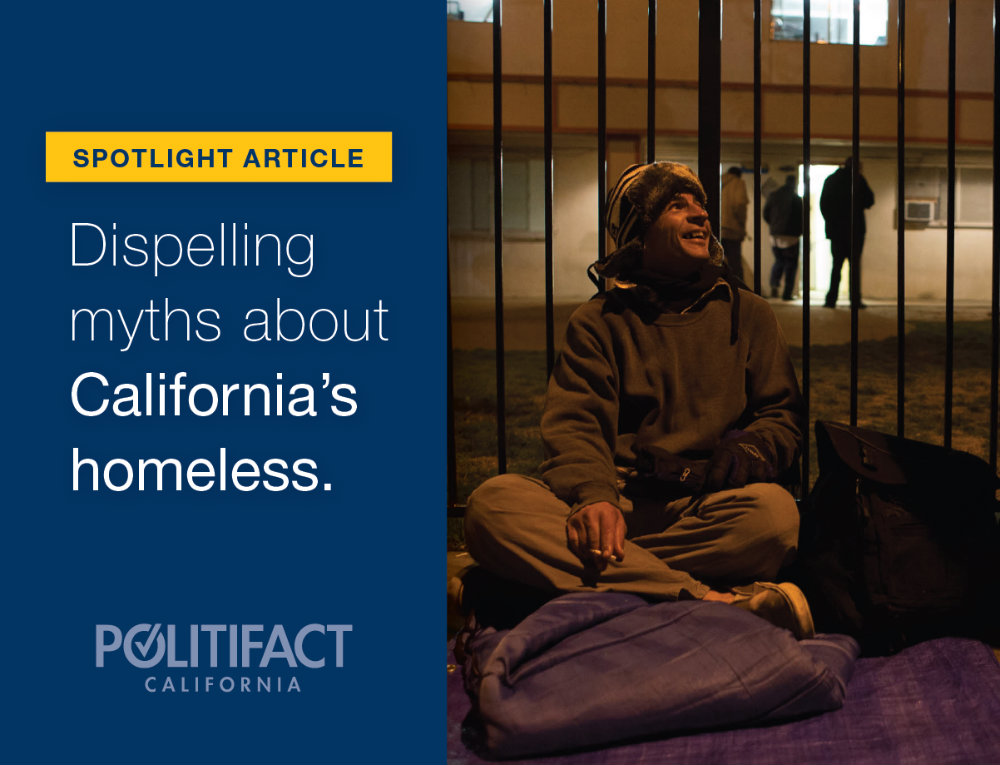 Sarah Backus lives in a tent on the streets of Sacramento.

The 56-year-old mother of three said she hears these myths and stereotypes about the homeless all the time:

“We’re the scum of scum … we’re lower than anything,” said Backus, whose makeshift home stood next to many more lining a sidewalk near Sacramento Loaves & Fishes, a nonprofit that feeds and shelters the homeless.

“We wouldn’t be homeless if wasn’t for our drug problem or alcohol problem, or mental problem,” she added. “No, that’s usually caused because of our homelessness.”

City and state leaders are paying more attention to California’s surging homeless population. The total topped 134,000 last year, up 14 percent from 2016. They’re pushing for more housing and money to curb a crisis made worse by the state’s lack of affordable housing.

This week, for example, Democratic Gov. Jerry Brown signed a state budget that includes $500 million for cities to address homelessness.

But even with this greater emphasis, misconceptions about the homeless persist, leaving those who live on the streets as one-dimensional in the minds of many, and oftentimes misunderstood.

Capital Public Radio and PolitiFact California joined nearly 100 newsrooms across the country this week to focus on stories about people without homes through the U.S. Homeless Project.

For this article, we spoke with several policy experts to explore common myths and the sometimes surprising realities about the homeless.

Myth #1: California’s homeless are from somewhere else — and moved here for the mild weather and social services.

Reality: Experts say this is one of the most common and inaccurate assumptions about homeless Californians.

“People when they become homeless, more often than not are from the community in which they’re living homeless,” said Ben Avey, a spokesman with Sacramento Steps Forward, a nonprofit dedicated to ending homelessness in the Capital City. “And they often move to the streets very near where they lived in the past. You may not recognize them. But they are members of your community.”

Chris Martin, an expert on homeless policy for the nonprofit Housing California, added that the stereotype “is just not true.”

Martin cited a study from May 2018 by the Los Angeles Homeless Services Authority, which found 75 percent of the people on the street in Los Angeles County had a home in that same county before they lost it. It also showed that 65 percent of the unsheltered homeless had lived in that county for at least 20 years. Only 13 percent were from out of state.

Reality: Martin said it’s often the stress and trauma of living without a home that leads to addiction and disease, or makes it worse.

Myth #3: Homelessness is a choice.

Reality: This is another frequent misconception, said Veronica Beaty, policy director at the Sacramento Housing Alliance, which advocates for supportive housing for the homeless.

“That’s simply not true at all,” Beaty said. “The reality is that homelessness is a byproduct of our broken housing market.”

“For every $100 that rents go up in Sacramento, and in cities like Sacramento, we see an increase in the number of people experiencing homelessness of anywhere from 15 to 30 percent.”

Beaty cited a point-in-time count survey conducted in January 2017 in Sacramento County that found a 38 percent increase in the homeless population from two years earlier. Sacramento’s rents grew by nearly 10 percent in 2017, faster than anywhere in the country, according to Sacramento Bee review of data from real estate firm Yardi Matrix.

Experts say there’s one more myth: The idea that homelessness “can’t happen to me.” They cite the growing number of first-time homeless people in the state, driven by high housing costs.

They blame higher rents, evictions, illnesses and other dramatic life events for driving people onto the streets.

“In my case, I lost my husband,” added Backus, a former stay-at-home mom before she eventually became homeless. “My consequence is I got to sleep on the sidewalk.”

CLARIFICATION: We received feedback on our analysis of Myth #2. To clarify, our research shows there is, indeed, a significant percentage of homeless individuals who have a substance abuse disorder and/or a mental illness. Our analysis, however, also found that it is a myth to say that these problems are always the cause of homelessness. Oftentimes, they are the result of the stress and trauma of living without a home.