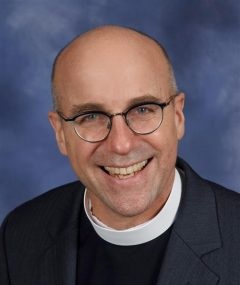 Brian became Dean of Trinity Cathedral in 2006. Before coming to Sacramento, Brian was the Rector of St. Thomas Church in Sun Valley, Idaho, Canon Pastor of St. Michael’s Cathedral in Boise and Curate & Chaplain of Holy Nativity Church and School in Honolulu, Hawaii.

Brian was raised in an Air Force family and while his family moved a great deal, he lived mostly in the Eastern U.S. When in high school, Brian met his wife Andrea. Brian and Andrea both graduated from West Point and served as officers in the Army. Brian left the Army in 1988. He graduated from Virginia Theological Seminary and was ordained as a deacon and then priest in 1991. He received his Doctorate in Preaching from Seabury Western Theological Seminary in 1999.

In addition to leading congregations, Brian has been involved in interfaith conversations, primarily with Tibetan Buddhists. In 2005 he organized and facilitated a conversation with the Dalai Lama and religious leaders in Idaho. In 2012 he was included in a documentary on the Buddhist Heart Sutra and invited to participate in the International Buddhist Conclave in India. In Sacramento, Brian practices yoga at Zuda Yoga Studio(link is external) and helps lead sessions that combine yoga, meditation, teaching, Christian scripture and prayer.

Brian has also been an advocate for marriage equality both in the church and state. In 2009 he was awarded the “Four Freedoms” award from Sacramento’s Stonewall Democrats for his work on Marriage Equality in California. He is one of the co-conveners of the Consultation which works on LGBT inclusion in the Episcopal Church and Anglican Communion.

Brian’s wife, Andrea, is an Episcopal priest and a chaplain in the U.S. Army Reserve. They have two children.